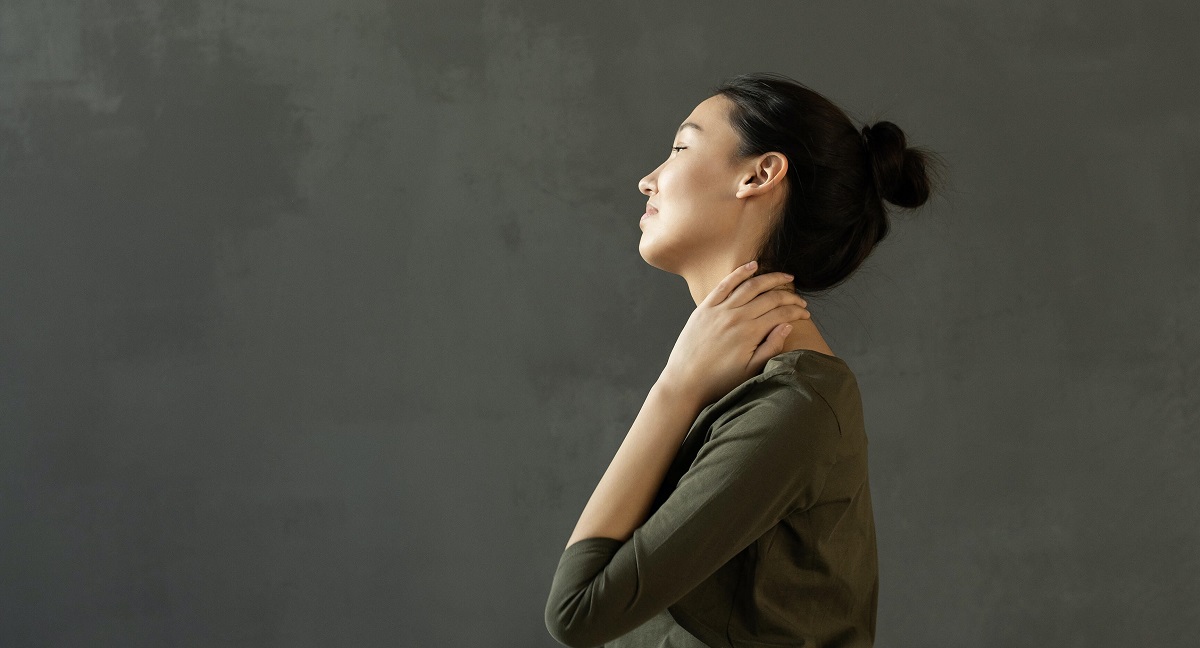 In cases of mild scoliosis, the Backpod® can be used directly next to the spine to strongly counteract the twisting in the mid-back area. Twisting in the mid-back means that the lateral ribs are slightly raised on the side to which the spine rotates. If you are lying on your stomach, you can see this in your back. You can see a slight elevation of about 50 mm right next to the spine. Now, when you press down on these raised ribs (which are suspended from the spine), it's like a little chisel or lever that you use to "break up" the rotation in the spine. This is exactly how the Backpod® works when you lie backwards on it. The pressure is applied with the help of your own upper body weight. Position the Backpod® on the curve of the raised rib, lie back on the Backpod® and stay in this position for at least one minute. Then move it up and down about 50 mm at a time in the mid-back area. In this simple way, you can counteract this permanent twisting in scoliosis and also perform the exercises at home at any time. Scoliosis is usually treated with exercises and stretches at home. These treatments are correct and useful, but they do not apply as much specific leverage to the twisted joints as the Backpod® does. A combination of the two is ideal. If you develop a slight hump during the course of your scoliosis condition, use the Backpod® normally on your spine as well. The iHUNCH site explains how to do this. Also check out our YouTube video 'How to treat (most) mild scoliosis middle back pain'.

With the help of the Backpod®, constricted sacroiliac joints, which can often occur during or after pregnancy and after a fall on the lower back or coccyx, can be released. The impact often jams the sacrum at the sacroiliac joints, making it immobile. Thus, greater pressure is placed on the coccyx when one sits down. Permanent pain can result because the tailbone has to absorb repeated blows.

This type of coccyx pain cannot be relieved by local treatment of the coccyx itself, but will not disappear until the sacroiliac joint can move normally again. The extremely robust interplay of capsules, ligaments and fascia around immobile sacroiliac joints means that good treatment results from mobilization and manipulation techniques often do not last, because the surrounding shortened collagen tissue simply constricts them again. The Backpod® is perfect for slow stretching so that the sacroiliac joints remain free.

Lie with your back on the floor, thighs vertical, shins horizontal, ankles crossed and heel propped on the edge of a table or chair. The Backpod® is positioned lengthwise under the sacrum. Relax on the Backpod® once a day for several minutes. While doing so, use your own body weight to stretch the narrowed sacroiliac joints.

It can still take weeks before the sacroiliac joints can be moved freely again, and sometimes they are so narrowed that you even have to rely on a greater effort from a specialized therapist in mobilization or manipulation techniques. The Backpod® is then also very suitable for follow-up treatments to further stretch the treated areas and thus keep them free. Check out our video below or the video on Youtube.

The Backpod® should only be used to stretch constricted and hardened sacroiliac joints. If it is used to stretch sacroiliac joints that are already excessively mobile, the situation will worsen The Andry Vleeming test is best suited for checking for possible hypermobility of the sacroiliac joints in order to clinically differentiate between the two conditions. To do this, the patient lies on his back and actively raises one leg stretched as far as possible. This movement is then repeated again and a therapist squeezes the patient's pelvis from both sides (this means that the sacroiliac joints are artificially compressed and stabilized). If the patient can clearly lift the leg higher without pain, it is an indication that the sacroiliac joint is unstable and too mobile. In this case, neither the Backpod® nor any other method should be used. For these problems, it is best to strengthen the muscles and stabilize the pelvic area. See a physical therapist for this.

Sacral pain during and after pregnancy is common. Usually, excessive movement (hypermobility) and strained sacroiliac joints are given as the cause because the ligaments weaken and soften during pregnancy due to hormonal changes, allowing the sacrum to open fully so that the baby can fit through the pelvis. However, this does not explain why the sacral pain is only unilateral, since all ligaments presumably loosen equally. As yet unpublished research from New Zealand and extensive clinical experience indicate that unilateral sacral pain that occurs during pregnancy is much more likely to be from a narrowed or immobile sacroiliac joint. Usually, these patients have fallen at some point or had an impact in the low back, pelvis or coccyx. The result of this is probably a stuck and immobile sacroiliac joint. This means that as pregnancy progresses, the surrounding ligaments become looser and looser, causing the stuck sacroiliac joint to become relatively tight, which in turn can trigger pain.

These problems can generally be solved well and quickly by mobilizing the constricted sacrum using manual physiotherapy techniques, or by simply lying down on the Backpod®. This again confirms the effectiveness of the Backpod®, as the patient no longer has any discomfort, although she is still pregnant and the baby continues to grow. Therefore, the pain cannot be caused only by stress and strain due to pregnancy.

If the sacrum or coccyx pain persists for months after birth, the cause is usually an immobile sacroiliac joint, because the ligaments have strengthened again after birth. The Backpod can also be used to free the constricted sacroiliac joints, as described above.

This disease is also called Scheuermann's disease and is an inflammation of the thoracic spine that occurs mainly in adolescents. The acute inflammation usually disappears on its own after a few years, leaving behind a narrowed, curved mid-back area. The Backpod® is excellent for these conditions because, along with the program created for it, it primarily addresses the problems of a hunchback. See our iHUNCH page for more information.

The same treatment can also be applied cautiously during the acute inflammatory phase, since there is as yet no satisfactory explanation for the CAUSES of spinal inflammation. Probably the forward curved spine of a young person is permanently overloaded.